Two of the most talked about policy proposals for reducing emissions are a carbon tax and implementing a cap-and-trade scheme. I'm interested in understanding: how do these differ? And which is the better option?

From an economist’s perspective, climate change is an example of a negative externality. Externalities seem to have been first discussed in Arthur Pigou’s 1920 book The Economics of Welfare, and can be thought of as the spillover from an activity. An example of a negative externality is a chemical plant that releases its wastewater into a nearby river. There can also be positive externalities: if you have work done on your house to make it more attractive you increase the value of your neighbours’ houses as well as your own. Either way, an externality affects people not directly participating in the activity, like the people downstream of the chemical plant.

A carbon tax and cap-and-trade are both ways of reducing emissions by implementing a Pigouvian tax, which is a tax on an economic activity that generates a negative externality. 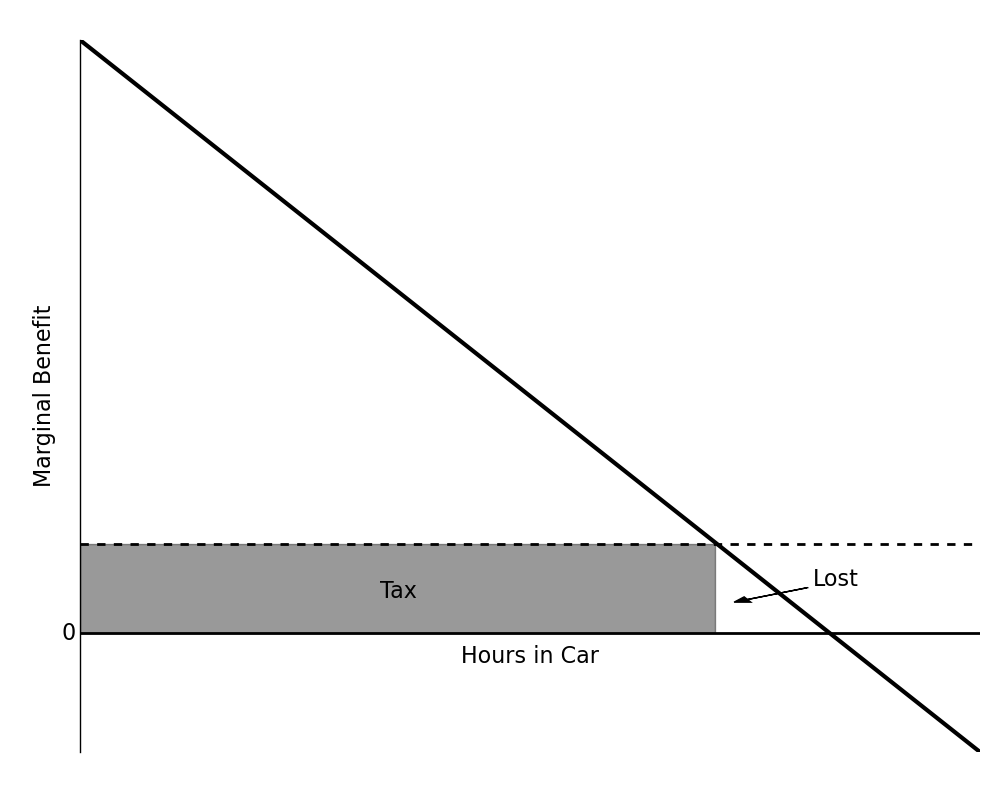 Eventually driving for a little longer actually produces a negative marginal benefit, because you spend too much on gas, waste too much time in the car, etc. Conventional economic thinking is that economic actors increase their usage of a resource until the marginal benefit is zero.

The idea of a Pigouvian tax is to make an economic activity more expensive so that the marginal benefit goes to zero faster. In other words, moving the x-axis on the graph further up the y-axis (dashed line). The tax revenue (shaded) helps pay for the negative impacts of driving your car. In a cap-and-trade system the “tax” comes from businesses paying for the emission permits. The triangle between the shaded rectangle and the marginal benefit line is “lost benefit”, which has to be taken into account when setting the tax rate.

In a cap-and-trade scheme the x-axis is emissions, whereas with a carbon tax the x-axis is price. This makes cap-and-trade more appealing, since we can precisely control the total emissions, whereas with a carbon tax we can only control the cost of emitting. In either case the tax revenue can be used to help people deal with the consequences of climate change. Estimating the lost benefit is difficult of course; estimates vary pretty widely, though in 2009 the CBO estimated it at less than 1% of GDP in 2020 and 1-3.5% of GDP by 2050. These estimates also didn't account for the economic benefits of reduced atmospheric carbon dioxide concentrations.

From a more abstract point of view then, the question of which is the better option depends on one's priorities. A cap-and-trade scheme would directly constrain emissions, but could lead to economic instability, while a carbon tax would lead to more uncertainty over emissions, but would be safer for the economy. From a more practical point of view, however, there are a number of issues with actually implementing a cap-and-trade system which could potentially be avoided with a carbon tax.

Before getting into these issues, it is possible that a cap-and-trade scheme would create a market for emission permits which could be exploited by large corporations, investment firms, etc. But ideally emission permits would be relatively straightforward and wouldn’t be susceptible to scams and other ways of exploiting knowledge asymmetries. I'm going to assume this would be a minor issue.

My first concern is the shear complexity of implementing cap-and-trade. Although cap-and-trade has already been effective in reducing sulfur dioxide emissions, carbon dioxide emissions are a completely different scale. Every part of the economy would be affected and would have to be considered, which makes cap-and-trade seem like a formidable legislative task. How big would the total cap be? How big would individual permits be? How would trading be regulated? In fact, we would almost surely need a hybrid system, since cap-and-trade is impossible to implement on small scales (individual people or households). If we want to implement something as soon, and as fairly, as possible, a carbon tax seems like the more viable option.

A second issue is “grandfathering” in emission permits: giving free, or very cheap, emission permits to existing companies. This is often seen as an incentive for businesses to support cap-and-trade, but it would be a significant loss of revenue for governments. And again, the legislative task of determining who to give permits to and how many permits to give them, would be very problematic.

Grandfathering also favors large, well-established companies, which can devote more resources to lobbying for permits, over smaller, newer companies. Analogously, developing countries might be impacted more than industrialized countries. This might seem counter-intuitive, since big companies/wealthy countries are the worst polluters. But as well as having more bargaining power, they also have more cash reserves and better credit ratings, making it easier to get loans. Suppose a start-up comes along that has a way of making Coca-Cola with half the emissions of actual Coca-Cola plants. Before it can even make one bottle, it has to acquire the permits for the carbon it will emit, in addition to all its other costs. On the other hand, with a carbon tax small businesses or developing countries can defer the cost of paying the tax.

Similarly, since we don’t control the cost of carbon under cap-and-trade, it is possible that less established companies or countries would be priced out of getting new permits. It might actually be in the interest of big companies/wealthy countries to drive up the price of carbon to discourage competition. Less established companies would also be more susceptible to swings in the price of carbon -- the issue of uncertainty in emissions versus uncertainty in the price of emitting again. Either way, competition and innovation seem to be discouraged.

Both options provide good incentives to reduce emissions, while also addressing the effects of negative externalities. Right now, I lean on the side of carbon tax. Implementing cap-and-trade seems overwhelming from a legislative perspective and some things would likely fall through the cracks. And, while I don’t worry about permits being used dishonestly, I do worry that they would benefit larger companies more than smaller ones and developed countries more than developing countries.

There are some related and interesting questions. For instance, the “social cost of carbon” can be used to price carbon, say for a carbon tax. How is this cost calculated? And how exactly are the emissions of a given company/person/etc. measured? Both must involve a number of assumptions, so what is the uncertainty?