The Two Climates of the Two-Layer QG Model

One of the simplest models of mid-latitude dynamics is Phillips’ two-layer quasi-geostrophic (QG) model on a \(\beta\) plane. This consists of two layers of constant density, with the top layer lighter than the bottom layer, whose interface is relaxed to some equilibrium slope (which represents the tropics receiving more solar radiation than high latitudes). Surface friction is also present in the lower layer:

This system was used by Phillips in 1956 as the basis for the first numerical weather model, and since then we’ve learned a lot about the atmosphere by studying the two-layer model because, despite its simplicity, it captures the main features of the mid-latitude circulation that we care about, like annular modes and other behaviors of eddy-driven jets. (Similar systems are used to study jets in the ocean and on other planets).

The Two Climates of the Model

Another way to make the PV gradient larger in the lower layer is to take the original set-up and change the sign of \(\beta\). This could happen with a strong, negative topographic \(\beta\), but otherwise you have to imagine a planet that's wider at the poles than at the equator (like an inverted cone).

We could summarize all this by saying that the two-layer model has two climate: the Earth-like climate 1, and climate 2, which is like a planet with a reversed temperature gradient. We can go from climate 1 to climate 2 by making one of the perturbations discussed above, and can go back by adding another perturbation:

Here’s what the zonal-mean winds in the two layers look like in simulations of these climates with Earth-like parameters: 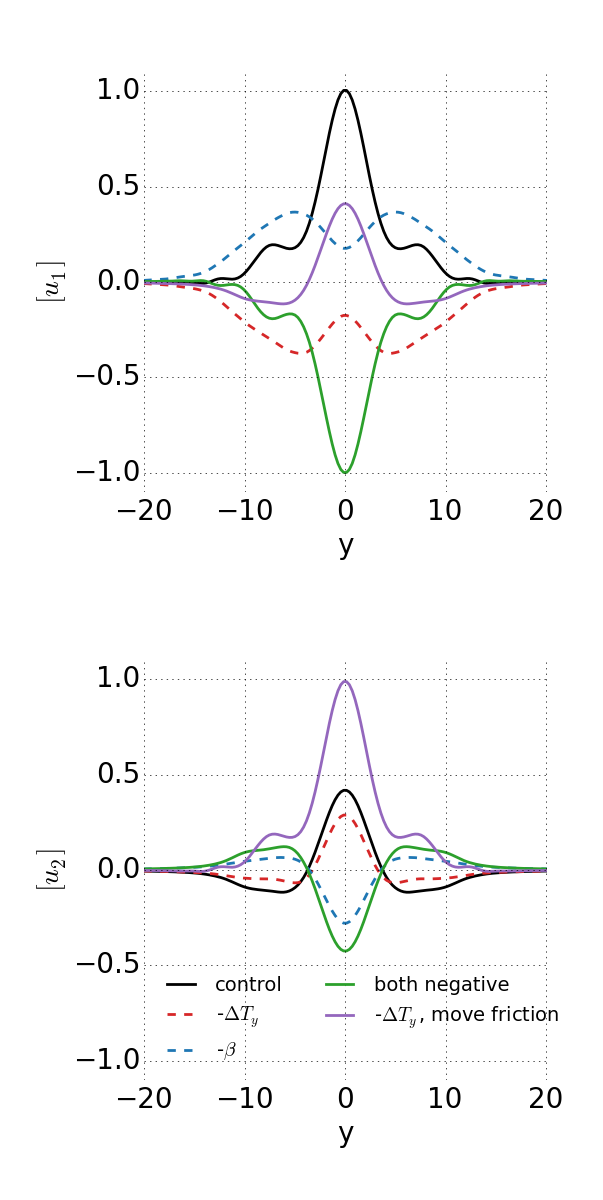 In the reversed temperature gradient case there are two strong easterly jets in the upper troposphere, while the winds in the lower troposphere are pretty similar to the control case, because they still have to balance the vertically-integrated eddy momentum flux divergence.

And for reference, here are snapshots of the PV in both layers of an Earth-like simulation and a simulation with the temperature gradient reversed: 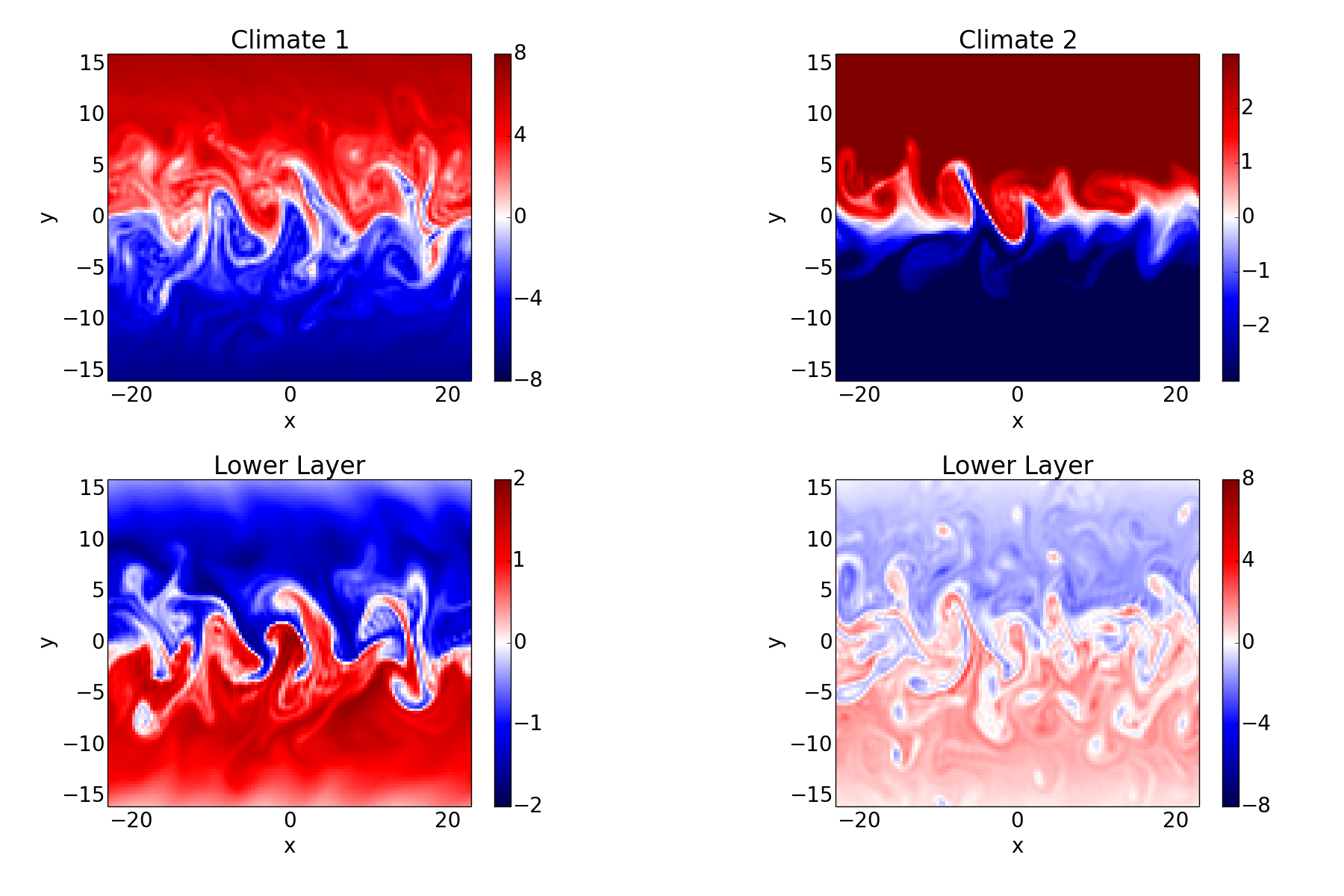 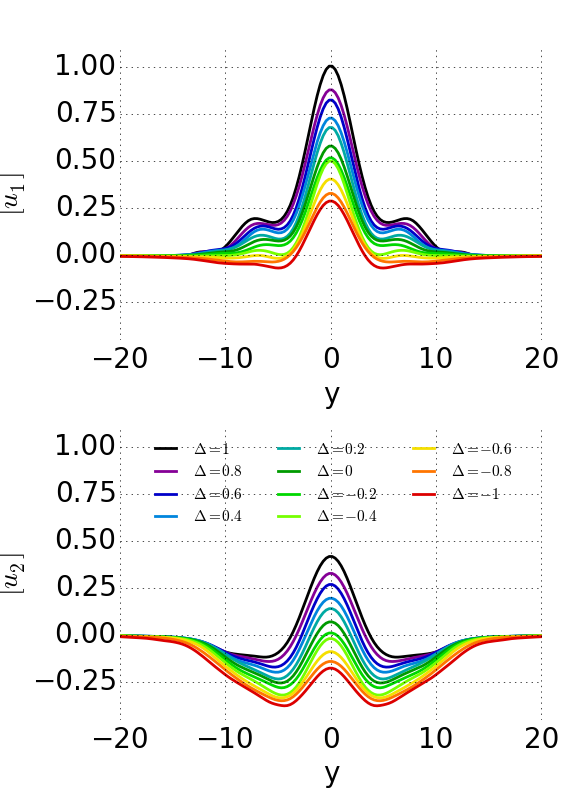 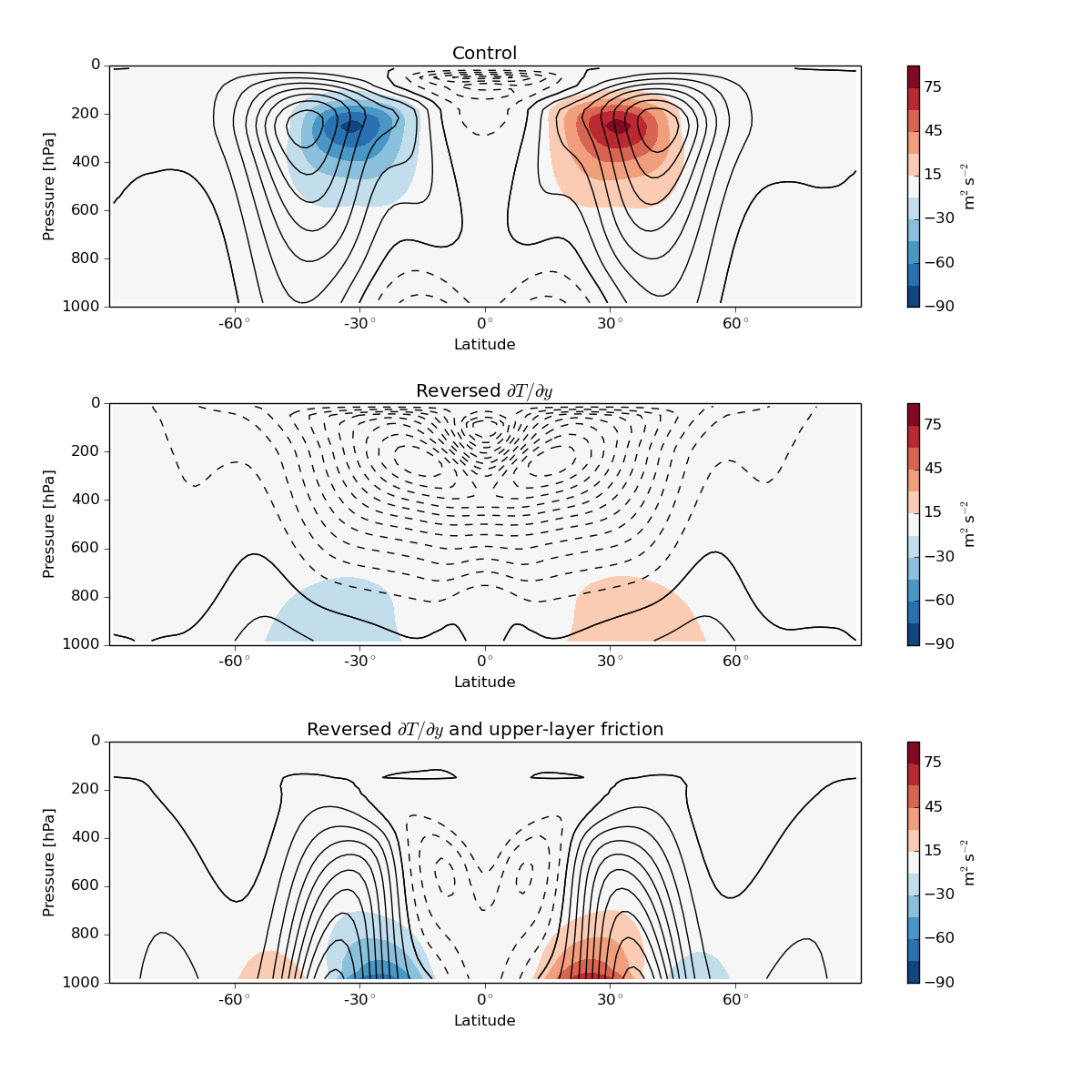 The spherical geometry and the presence of a stratosphere mean things aren’t exact anymore, but qualitatively these are similar to the corresponding two-layer simulations.

I've already mentioned some situations in which climate 2 would be relevant, like a planet with high obliquity and a situation with a strong negative topographic \(\beta\) effect. The flow underneath an ice shelf might also be like climate 2 if the water feels a strong frictional force from the ice.

Besides these special cases, I think the more interesting point is that these results highlight the symmetries of the 2-layer model, which mean that its climate is defined by the position of the friction relative to the PV gradient. This is really the only degree of freedom in the model; we can change parameter values, but as long as the friction is in the layer with the smaller PV gradient the climate is fundamentally "Earth-like".

(Email me if you want code for any of the simulations).