Theories for the Poleward Shifts of the Mid-Latitude Jets

A major open problem in atmospheric dynamics is what causes the eddy-driven mid-latitude jets to shift polewards under climate change and, conversely, to shift equatorwards during strong El Nino events. This is seen in idealized models and in comprehensive climate model simulations of future warming scenarios, though more clearly in the southern hemisphere than in the northern hemisphere (where there’s more land). Understanding these shifts is important scientifically and for society, especially as they affect the location and severity of extreme weather events in mid-latitudes.

A closely related question is what causes the tropical circulation to widen and contract in these scenarios (see here for a recent review). These two phenomena might be related, but I’m not going to get into that here, and only focus on the jet shifts.

There are several different theories for why jets shift, but no consensus. To put these together I find it helpful to use this schematic of the dynamics of the mid-latitude upper troposphere: 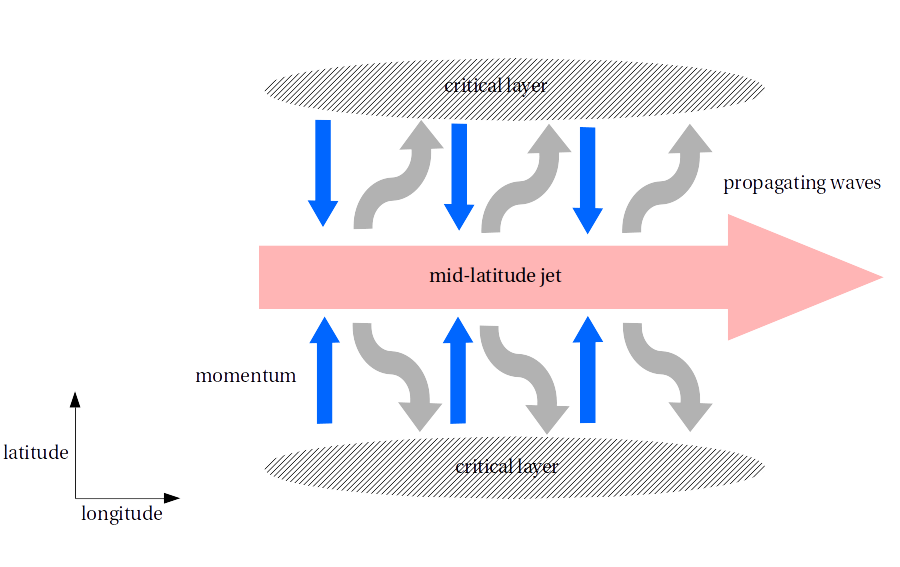 This is the classic picture of a baroclinically unstable source region – the jet – where eddies (Rossby waves) are excited and then propagate away. The eddies break at lower and higher latitudes and flux momentum back into the jet. With this picture, jets could shift because of shifts of the source region or of the sink regions, which affect the eddy momentum fluxes that drive the jet.

The jets feel the effect of global warming through the structure of the temperature response in height and latitude. The latitudinal variations in the response are particularly important, since the zonal wind is connected to the meridional temperature gradient by the thermal wind relation: $$ \frac{\partial u}{\partial z} \sim \frac{\partial T}{\partial y} $$

With global warming the largest warming is in the tropical upper troposphere and, in northern hemisphere winter, in the high-latitude lower troposphere:

The dispersion relation for a Rossby wave is: $$ c = u - \frac{\beta}{K^2} $$ with \(u\) the zonal-mean zonal wind, \(c\) the phase speed of the wave, \(\beta\) the meridional gradient of the Coriolis parameter and \(K\) the total wavenumber. Rossby waves break at their critical latitudes, where \(u \sim c\) and \(K\) goes to infinity (these are also called critical layers). So shifts of the sink regions are due to some combination of changes in the waves' phase speeds and changes in the zonal-mean wind.

The other approach is to focus on the baroclinic stirring which is the source for the eddies. The essence is that enhanced warming in the tropical upper troposphere results in a poleward shift of the maximum meridional temperature gradient in the upper troposphere which, combined with an increase in the static stability of the subtropics (see here), pushes the region of maximum baroclinicity polewards. A number of papers have attributed the poleward shift to this movement of the baroclinicity, including Lu et al. (2008), Butler et al. (2010), Wu et al. (2011) and Tandon et al. (2013).

Teasing out the different mechanisms

All of these mechanisms probably play a role in the jet shifts, with different levels of importance. And their relative importances probably vary across models of different complexity. Figuring out which mechanisms are most responsible for driving the shift isn't easy though. For instance, Robinson (2000) showed how an initial jet shift can cause a shift of the low-level baroclinicity, which feeds back on the jet shift. Barnes and Hartmann (2011) suggest that the poleward jet shift itself actually causes eddy length-scales to increase. There are a lot of things to untangle in this wave-mean flow problem. Nevertheless, some attempts have been made to separate out the different effects:

More than anything, what we need is a quantitative theory for the baroclinic stirring: what sets the strength and location of the source region. We might expect this to shift poleward because of changing temperature gradients, but we can't predict how changes in jet speeds and eddy properties will affect this, and are forced to rely on model simulations.

Another issue is that these theories are all based on dry dynamics. To fully understand – and predict – the jet shifts we also need to understand the roles of water vapor and clouds (Ceppi and Hartmann (2016) is an example of a study looking at the role of clouds). The stratosphere also influences the jets, and it seems like the recovery of the ozone hole will push the southern hemispheric jet equatorward a bit over the next few decades. Finally, there's the problem of internal variability: how long it takes for jet shifts to be clearly discernible from the noise (if they ever are), and whether the jets' internal variability can be leveraged to predict how the jets will shift, using ideas like the fluctuation-dissipation theorem.