Why Clouds Get Denser in a Warmer World

How clouds change in a warmer world is one of the most important uncertainties in climate change projections. We're especially focused on how cloud cover changes, particularly low cloud cover, because even small changes in low clouds would have a big impact on how much Earth warms up in the near future.

One thing we can expect is that clouds will get denser in a warmer world, that they'll have more condensed water. Betts and Harshvardhan (1987) gave an explanation for why this happens, and Tim Cronin and I recently extended their explanation for more realistic assumptions in our paper on precipitation efficiency.

Clouds and the Saturated Moist Adiabat

Now we can look at how cloud density varies as a function of temperature, pressure and entrainment (if \(\varepsilon = 0\) we get back the Betts and Harshvardhan scaling). Some examples are plotted here: 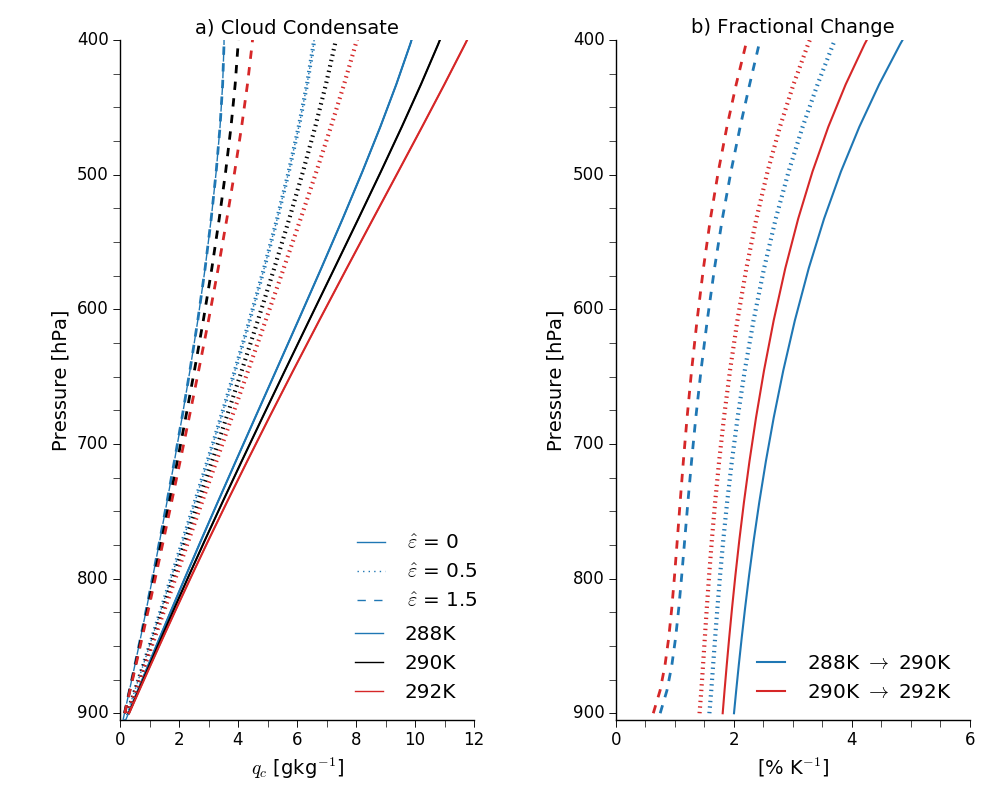 Panel a shows cloud condensate mixing ratios for plumes starting at 900hPa with an environmental relative humidity of 80% and with various cloud-base temperatures. I've parameterized \(\varepsilon\) as a decreasing function of height: \(\varepsilon = \hat{\varepsilon} / z\), and then also varied \(\hat{\varepsilon}\).

So clouds get denser for the reason identified by Betts and Harshvardhan, but this increase in density is reduced by entrainment. A caveat is that we've assumed that all the condensed water stays in the cloud, i.e., that none of it forms rain and falls out. The rate at which condensed water rains out is often taken to be proportional to the cloud density, so accounting for precipitation is tricky. Maybe it's better to say then that we can expect the total condensed water (cloud + precipitation) to increase in a warmer world.