The Pattern Effect and Changing Climate Sensitivity Over the Historical Record

One issue which has gotten attention recently is that inferred climate sensitivity changes over time: 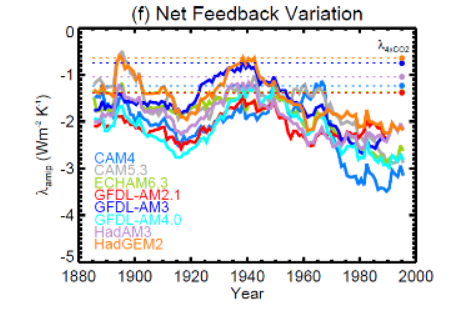 The climate feedback parameter \(\lambda\) was small between about 1920 and 1960 (implying a high climate sensitivity) and has been increasing since then (implying a lower sensitivity). To calculate this, an assumption is made about the forcing \((F)\) and then the global-mean surface temperature \((T)\) is regressed against the net TOA flux \((R)\), using \(R = F - \lambda T\). Alternatively, you can also calculate \(\lambda\) as the derivative \(\partial R / \partial T\). Either way, observations and models give a consistent picture of \(\lambda\) changing over the 20th century.

Explaining this with the Pattern Effect

One way to explain this is through the "pattern effect": the feedback at a particular time is partly determined by the pattern of warming. So the strength of \(\lambda\) changes over time as anomalous SST patterns change over time.

For simplicity, I'm assuming that the \(\lambda\)'s and \(c\) don't change over time, and also that they take the same values for the forced components as for the residuals. To make things even easier, I'm also taking out any residual forcing, like aerosols, so there's just internal variability.

In this system, changes in the climate sensitivity are entirely due to changes in the pattern of warming, since the \(\lambda\)'s are constant over time and don't change for different forcings or for internal variability. The global-mean feedback parameter in this system at a particular time \(t\)is $$ \lambda_g(t) = \sum\lambda_i T_{F, i}(t) / \sum T_{F, i}(t) $$

The global-mean feedback depends on the warming in each box and on the local feedback of each box. So, even if nothing else happens, \(\lambda_g\) changes over time as \(T_{F, 1}\) and \(T_{F, 2}\) change. If box 1 has a high sensitivity (small \(\lambda_1\)) and box 2 has a low sensitivity (large \(\lambda_2\)), but for some reason box 2 warms up faster than box 1, then the observed climate sensitivity will increase over time as the warming in box 1 catches up. (Differences in ocean heat uptake could cause these different rates of warming.).

The residual temperature patterns -- here just made up of internal variability -- can cause large changes in the inferred climate sensitivity, and have to be taken out to accurately estimate \(\lambda_g\).

In this simple model, the pattern effect makes it hard to estimate Earth's sensitivity from the historical record, as the inferred global-mean feedback parameter changes over time both because the pattern of the forced response changes and because of internal variability. In the real world, there's also the residual forcings of aerosols, volcanoes, etc.; the possibility that the local feedbacks change over time; the possibility of non-local feedbacks; and ocean heat uptake, which I've mostly ignored here. Going back to the data, the changing inferred climate sensitivity over the historical record is the result of some combination of internal variability, changing patterns of the forced response and non-CO\(_2\) forcings. Untangling these isn't easy, and Andrews et al. attribute the decreasing sensitivity over the historical record to changing SST patterns that result in more negative global-mean cloud and clear-sky longwave feedbacks. The next challenge is figuring out why SSTs changed in this way.